I think that the appeltart in Dudok is going to he hard to beat.

There are lots of great places to eat and drink in Rotterdam. No doubt I’ll be talking about a few of them over the next few months. There is one place that I’ve been to a few times now that is really worthy of early note.

In 1945, Rotterdam started to think about rebuilding itself after the devastation of the second world war. Influential Dutch architect Willem Marinus Dudok, designed a new insurance building with a grand Hall on the ground floor. I’m not sure what happened to the insurance company but the space is now a grand European cafe and brasserie. Being Dutch is is a lot less formal than its Viennese cousins . The twentieth century classic building is just as grand and the waiting staff just as smart but the atmosphere is bright and welcoming. There is free wifi, (not remarkable for

Rotterdam), tables with laptop sockets, magazines and newspapers. It’s busy but there always seems to be a place to sit, including outside in nice weather.

I’ve not sampled much of the menu yet. I was told that their appletart was to die for. A couple of months ago I needed some wifi in order to take part in a Culturapedia Team Meeting via Google video hangout. (This was before I got connected in the apartment). Go to a cafe and you have to order something so I went for the famous apple tart  – with cream. It was a

major distraction to my colleagues who had to enviously watch me eat it as we talked over our various projects.

Dudok is now a bit of a chain with grand cafes in a number of Dutch cities and a kiosk at the central station. They also have a pizzeria in Krallingen. This building is where it started and I’m glad that in a city or architecture one architect is being remembered in such positive way.

Last week I went into town to buy something prosaic like a small saucepan. As I passed Dudok I couldn’t resist just making sure that the appeltart was as good as I’d remembered it. It was.

I think that it’s time to write something about my new apartment.

I have bought a two bedroomed apartment on Pannekoekstraat, (Pancake Street)  The Luftwaffe did a lot of damage to Rotterdam in 1940. The centre of the old city was more or less flattened in a 50 minute bombing raid. The city was largely rebuilt in the 1950s. Rotterdam is not a city of quaint bridges, windmills and fancy dutch gable fronted houses. It is a post war city of concrete and brick from the fifties and sixties and glass and steel ever since.

Don’t for one minute think that this does not have its charm. Rotterdam has a fantastic architectural aesthetic and there is plenty of water, as you’d expect in a Dutch city. The fifties retro look is very fashionable and the eighties brought some quirky cube apartments and a giant pencil shaped block. In the noughties everything was high, glass and steel with cantilevered top floors and last year brought the stunning, gigantic new Market Hall.

The new Market Hall is a stones throw from my 1953 apartment in Pannekoekstraat which is on the second floor with its own bike store in the basement. There is a lot to like about the area and the flat. The place has a really nice atmosphere. We’ve slept there a couple of nights and it is quiet and calm. It has fantastic light with enormous south facing windows along the entire frontage. There are two balconies, one from the main bedroom at the front and the other from the kitchen at the back. The kitchen is a separate room but has a large opening into the living room allowing light to pass right through the building. 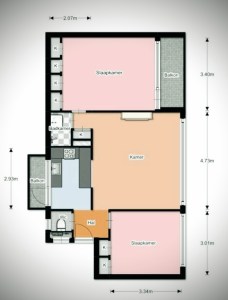 Back in the 1980s, my parents had a business selling and installing central heating, kitchens and bathrooms. There was a showroom in Prestatyn and they worked across North Wales. They sold kitchens from three companies, one of which was a Dutch company called Bruynzeel. They weren’t very common in the UK. It gave me a warm sense of nostalgia when I opened a drawer and realised one in the apartment is a Bruynzeel one. It’s like new but it was installed in 2002. They’re really good quality – not flat pack. I remembered them being delivered to the company workshop in Prestatyn on big Dutch lorries.

My new kitchen has everything you’d need – cooker, hob, extractor, sink.. there’s room for a washing machine and dishwasher too. 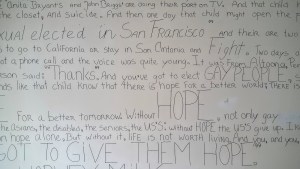 The writing on the wall

The flat was last lived in by the daughter of the man we bought it off and came with a number of very personal features. One wall in the living room  was home to a long and passionate statement by Harvey Milk, written in Black marker. Another wall was painted matt black. Fine for her but not my thing. When we went over on our roadtrip we bought some one coat white paint. The marker pen took four coats to cover. 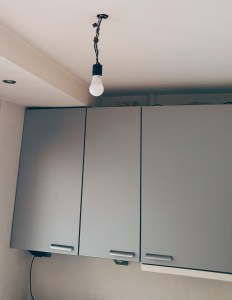 On the whole it’s in reasonable nick – paint and wallpaper will spruce it up nicely. There is an old and faded laminate floor, with some gaps, in the main bedroom and living room. It has already been taken up in the second bedroom. I’ve arranged for a new floor to be fitted throughout next time I go. I’ve fitted flooring successfully myself in the past but this time I’ve decided to pay someone else to do it. I won’t have the time or the tools to hand. It has to be delivered 48 hours before being fitted to acclimatise – this will give me time to paint more of walls.

The toilet and shower room will, ultimately need some attention. They function and are clean but are dated and tatty. The tiles are almost vintage and the sink in the shower room is almost as big as a bath. This will need to be a job for after I’ve moved in properly. They are, as I say, serviceable.

There is plenty of storage, in addition to the store in the basement there are large built in cupboards in the second bedroom and another next to the bathroom. The main bedroom, has plenty of room for three meters worth of Ikea wardrobes – more than enough for just my clothes. These will need to be ordered after the floor is fitted.

I’ve not yet seen the bike store. The previous occupant still had to clear it out. My estate agent has the keys. I go back on June 28 ready for a few days of painting and sorting things out. It’s is going to be a great place to live.