I’m very sorry, I’ve been far too quiet since I got here. I’ve been working hard.

I thought you’d like to know what I’ve been doing at university and how it’s going. We’re four weeks in, half way through term one. Erasmus University, (EUR), has four terms a year of eight weeks each. This term we have three courses. They are:

For Introduction to Economic Theory we have a three hour seminar each week and are ploughing through the weighty Krugman and Wells textbook. (there was some confusion over our text book). As I’ve said before I’ve done quite a bit of pre reading on economics but have concentrated on the different views and schools – who thinks what etc. Then weighty Krugman and Wells book is more technical. So far I’ve not come across a single reference to another economist. I’ve spent most of my time looking at supply and demand graphs and variants thereof. It’s not the most exciting book but I can see the logic of us going through it. Our lecturer, Paul helps bring it to together and valiantly tries to find cultural examples. Today we’ve been given out midterm assignment. I’ve got to prepare four arguments for a politician who is going to enter a debate arguing against public subsidy for the arts. A very interesting position for me to take given that my income over most of the past twenty odd years has come from public arts funding.  There will be an exam at the end of the course.

Introduction to Social Science Research is taught a bit differently. We are doing this course with a range of other students. Most of them are BA students in International media. We have another American textbook by Earl Babbie. We have weekly two hour lectures with Marc who does his best to animate what could otherwise be really tedious to what is a big audience. We’ve started to sit at the front to avoid the bachelor chit chat. We also have a three hour tutorial with Aldo – a charismatic Brazilian who has rapidly become all our favorite. He uses his own research to help us relate the general course to our area of interest. Last week we submitted part 1 of a three part assignment. In pairs, we’ve been developing research questions. Simone and I are looking at the differences and similarities between cinema and theatre audiences. Part 2 involve designing a quantitative survey and Part 3 some qualitative interview questions. There will also be an exam at the end of this course.

Thirdly we have Creative Economy and Creative Organisations. In a lot of ways this is the most interesting. We don’t have a set text book but are given three chapters or articles to read each week. We’re also encouraged to read around. We’ve been looking at things like creative motivation, organization and definitions. We are working with students who are doing electives or exchanges from other universities. We don’t have an exam in this course – phew! We are working on a ‘class assignment’ in groups. Our group are a fictional vlog, creatively reviewing content on Netflix. Each week we’re given questions to answer through the filter of our organisation. For our midterm assignment we’ve been given a range of statements. We need to choose two and argue for or against them using the set texts and additional reading where appropriate. We’ve only got a week to do this so I’d better get on with it. 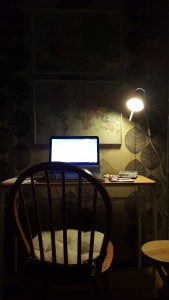 My desk awaiting my creative input

The whole course is taught in English, I couldn’t be doing it otherwise. I’m really lucky, most of my fellow students are studying in their second languages. The disadvantage of this is that a lot of the texts we are get are written in and about the UK. I’m hoping that as time goes on I will get to learn more about the rest of the world. The course comes from a western perspective and I expected that but, at the risk of sounding arrogant, I’ve a lot of experience of the UK cultural scene.

I’m actually really enjoying it all at the moment. There is a lot of reading and some of it is either challenging, tedious or even badly written. I’m finding my way through and starting to make the connections between the courses. I’m enjoying someone else making my organisational arrangements: be in this lecture at 11:00; read that chapter by Wednesday; submit your assignment on line by the 7th… I’m working hard but keeping up and learning.

Last week I had my induction day at Erasmus University and met all the other students on the Pre-Master course and Master course that I’m taking. The Pre-Master is a bit like year one of a two year programme for those who haven’t got an academic background in economics. We are truly an international group. I’m the only Brit on the Pre-Master though there are two doing the Master year. I have fellow students from Germany, Italy, Aruba, Taiwan, Hong Kong, Kenya, France…..

We’ve not started lectures yet but a few of us have been getting to know each other over the weekend. The Rotterdam calendar is packed with festival and public events. On Friday night we went to a gallery for museum night when it was open for free. Last night we went to experience the river show and fireworks as part of the  Wereld Haven Dagen, (World Port Days), festival. Rotterdam is about twenty kilometers from the mouth of the Rhine, which is called the Maas as if flows through The Netherlands. It is the largest port, (or haven), in Europe and right up in the global premier league of posts. The Wereld Haven Dagen festival lasts three days with the water show and fireworks being a key highlight.

There was a large naval ship onto which a transparent marquee had been erected housing a full orchestra.  The ship paraded, up and down the performance area. The music accompanied a

range of boats spurting water which was lit as it plumed into the air. There were lasers directed from the skyscrapers to the south of the spectacular Erasmus Bridge all of which formed an impressive backdrop to the show from our standpoint on the north bank. I cant imagine the difficulty of amplifying live music to both banks of a large river surrounded by tall buildings without it echoing back and forth. It worked but more volume would have added to the experience.

The backdrop is huge. I’ve seen , and been involved in, some events and projects that have failed to compete with the scale of the stage, Some public art I was involved in commissioning for Town hall Street in Blackburn looked great until it was dwarfed by the law courts. The dance performance at the end of the Preston Guild in 2012 and some of the early attempts at animating Salford Quays failed as the human form is too small for a mass audience in a big area.  After the spurting water we were treated to some pretty impressive trampolining on a boat. From where we were we cold just make it out but most of the audience probably didn’t even notice that something was happening.

This apparent pause in the show was, however, followed up by some very impressive fireworking. While watching professional fireworks I invariable find myself grinning with a kind of childish joy, the noise, the height, the light, the colour – what’s not to like. This was a great show from a barge in the river. The skyscrapers remained as the backdrop but the fireworks easily competed. the colour and the intensity of light was particularly impressive.

Yesterday I took a couple of hours to see what else the World Port Days festival had to offer. I pootled around on my bike, looked at stalls and explored a number of old boats including the only surviving Herring Logger built in 1912. Before the second world war this boat traveled between the French fishing ports on the channel and Lerwick in the Shetland Isles. It was an alarmingly small vessel for six men, the turbulent north sea and several tonnes of dead herring.

An added attraction of World Port Days is the Sea Shanty Festival. Choirs, mostly men from what I saw, from all over Europe gathered to sing and perform. It’s great, as a choir member myself I know how good it feels to sing with others. Disappointingly, even in the smallest of spaces, the choirs were all miked up and amplified, (and not very well). It was a real shame, It added a drone to the sound and distorted the voices. A choir can be heard. My choir back home frequently sings outdoors to appreciative audiences without amplification. Please organisers, drop the microphones and speakers next year – that way we’d get to hear the choirs. I shot this short video from behind the choir to avoid the speakers.

There is a very full calendar of festivals here in Rotterdam. I can’t go to the all. Next weekend there is a festival showcasing all of Rachmaninoff’s symphonies and solo concertos in three days, the launch of the cultural season with a festival of contemporary art on Witte de Withstraat, a street food festival and a heritage festival opening up buildings across the city, (this is also happening in the UK with a big event taking place in Blackburn including some somewhereto_ performers).

The list goes on – no reason to be bored in Rotterdam.